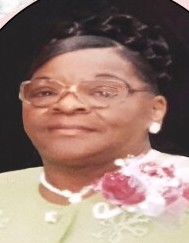 Stella Marie Reese was born to Willie and Roberta Wyatt on November 25, 1943 in Livingston, Texas. She was the 4th offspring of 9. In 1959 she married her husband Oliver Jack Reese and started a family. She loved to feed everybody and her door was always open. She never met a stranger. A few of her favorite things were to cook, play spades, chew bubble gum, and watch Walker Texas Ranger. There was no one who could make a sweet potato pie or greens like Stella Reese.

She was preceded in death by her parents: Roberta and Willie Wyatt, her sister: Evelyn Wyatt, her brothers: Willie Wyatt Jr. and Lister Wyatt, her son: Clenneth Reese and grandchildren: Stella Trahan and Rachel Reese.

Due to the unfortunate circumstances of COVID-19 funeral directors ask that you wear a face mask and gloves to the services.

To order memorial trees or send flowers to the family in memory of Stella Reese, please visit our flower store.