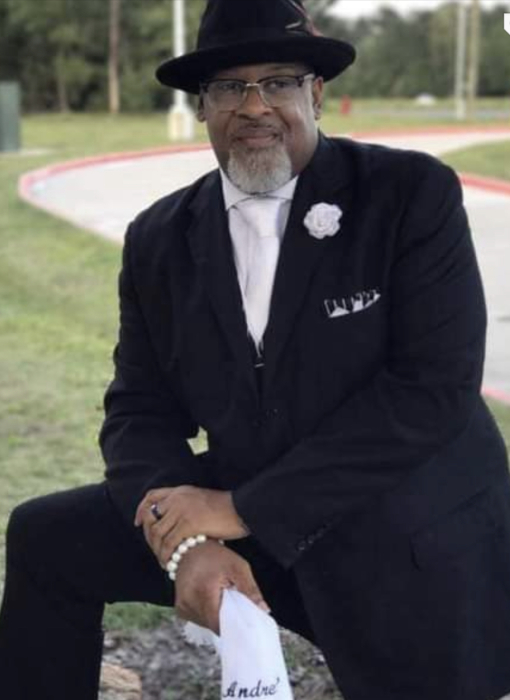 Andre’ “Dre” Burch, was the third of six siblings born on December 29, 1961 to parents Willie and Jaurine Burch (Branch), in Livingston, Texas.

He spent his early years in the Garner Prairie Community of Polk County, Texas, where he was surrounded by loving and Bible rearing family, friends and relatives. Andre’ accepted Christ at an early age and was baptized at Garner Chapel Missionary Baptist Church by then step-dad, Pastor Romie Phelps. The children participated in ALL church functions and activities because, one – it was not an option, two – there was not many other things to do, and most importantly it was enjoyable.

By second grade, we relocated to Livingston city limits, Greenfield Community where we continued to attend Garner Prairie MBC and Anderson Chapel MBC. Andre’ had a wholesome childhood although he suffered with asthma, this condition did cause his Mom to be more caring to him and he and she had a very close and special relationship.

Early in life, our Mom fed her passion for music into all her children, however half were more exceptional than the other half… Dre’ was definitely part of the more exceptional half. He had a natural ear and timing for all things musical.

After the death of our stepdad, Romie Phelps, our mom later married Johnny Robinson and we joined Macedonia Missionary Baptist Church, where Andre’ was involved in the church choirs, to later become Choir Director for several years. We were also, involved in the Livingston Mass Choir which was organized by Johnny Robinson. The Choir traveled across East Texas and hosted many extravagant musicals, as well as participated in civic activities through-out the county and neighboring counties.

With that love for music, Dre’ also loved dancing and was one of the best dancers in East Texas and beyond… as is evident of all the dance contests that he and Sister Jimmie Taylor won during the existence of the Family Affair Night club in Diboll, Texas.

After graduation from Livingston High School in 1981, Dre’, worked at different companies around Livingston, before beginning a career with the State of Texas Correctional Division, where he was employed for over a decade during the mid-80’s to mid-90’s. He then started a career in customer service, in which he also continued after relocating to Miramar, Florida.

Dre’ NEVER met a stranger and had so many people that he added to our family. He had the biggest, kindest, and most sincere heart that anyone can imagine. Dre’ loved praising God, family gatherings, and hanging with friends(his roots). He enjoyed visiting the elderly in the community and made sure to visit any chance he could. If he knew you were ill or in the hospital he was always there, prepared to sit with you and do whatever he could.

To order memorial trees or send flowers to the family in memory of Andre Burch, please visit our flower store.